Add to cart€11
Citadel Combat Cards is a fast-paced game for 2 players, in which you pit your fighters – each of which is represented by a card – against your opponent’s fighters. Whoever wins the most battles wins the game! Each game lasts for 6 rounds, during each of which attacks are made – ranged, melee and psychic.
Included are 60 cards, split into 2 decks – 30 for the Space Marines, and 30 for the sinister forces of Chaos – each of which fulfils a battlefield role (HQ, Troops, Elites, Fast Attack and Heavy Support). Setting up your cards and deploying the right card at the right time is the key to victory – special bonuses are applied when the right cards are supporting each other!
Each card features an image of a Citadel miniature, along with its name. 2 reference cards make it easy to determine special bonuses and victors for each battle.
Love Letter (EE)

Add to cart€12.50
Love Letter is a game of risk, deduction, and luck. Designed by Seiji Kanai, the game features simple rules that create dynamic and fun player interactions. Players attempt to deliver their love letter into the Princess’s hands while keeping other players’ letters away. Powerful cards lead to early gains, but make you a target. Rely on weaker cards for too long and your letter may be tossed in the fire!
Codenames (EE)

In Codenames, two teams compete to see who can make contact with all of their agents first. Spymasters give one-word clues that can point to multiple words on the board. Their teammates try to guess words of the right color while avoiding those that belong to the opposing team. And everyone wants to avoid the assassin.

Codenames: Win or lose, it's fun to figure out the clues. 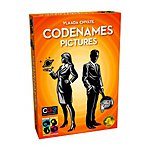 Two rival spymasters know the agent in each location. They deliver coded messages telling their field operatives where to go for clandestine meetings. Operatives must be clever. A decoding mistake could lead to an unpleasant encounter with an enemy agent – or worse, with the assassin! Both teams race to contact all their agents, but only one team can win.

Codenames: Pictures differs from the original Codenames in that the agents are no longer represented by a single word, but by an image that contains multiple elements. 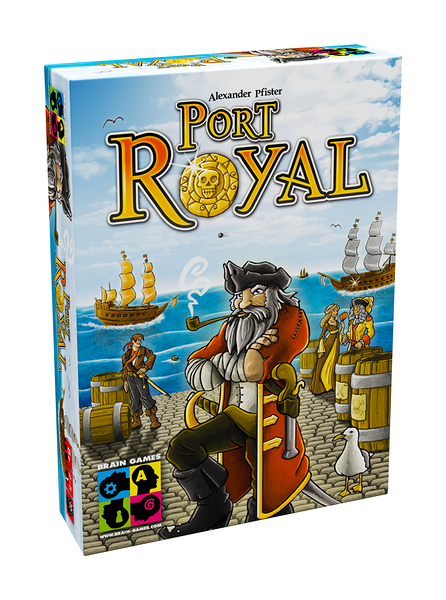 The 120-card deck depicts a coin on the back of each card — with players earning and paying coins throughout the game — and different items on the card fronts. On a turn, a player can first draw as many cards as he likes, one at a time from the deck, placing them in the harbor (an area near the deck). Each card shows one of the following:

If the player draws a ship with the same name as a ship already in the harbor, he's spent too much time dilly-dallying and his turn ends (after using the ship to attack, if possible), with all the cards in the harbor being discarded. Otherwise, the player can stop whenever he likes, then use/acquire one card if three or fewer ships are in the harbor, two cards if four ships are present, and three cards if five ships are present. Players rob ships, collecting the number of coins shown on them, then discarding the card, while they hire people, paying the number of coins depicted. After the active player takes his 1-3 cards, each other player may pay the active player one coin in order to take one card in the same way.

When one player has at least twelve influence points — which are on both people and expedition cards — the game is played to the end of the round, giving everyone the same number of turns, then the player with the most influence points wins. 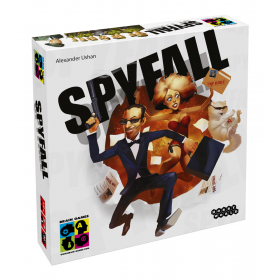 Spyfall is played over several rounds, and at the start of each round all players receive cards showing the same location — a casino, a traveling circus, a pirate ship, or even a space station — except that one player receives a card that says "Spy" instead of the location. Players then start asking each other questions — "Why are you dressed so strangely?" or "When was the last time we got a payday?" or anything else you can come up with — trying to guess who among them is the spy. The spy doesn't know where he is, so he has to listen carefully. When it's his time to answer, he'd better create a good story!

At any time during a round, one player may accuse another of being a spy. If all other players agree with the accusation, the round ends and the accused player has to reveal his identity. If the spy is uncovered, all other players score points. However, the spy can himself end a round by announcing that he understands what the secret location is; if his guess is correct, only the spy scores points.

After a few rounds of guessing, suspicion and bluffing, the game ends and whoever has scored the most points is victorious!