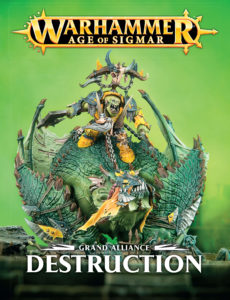 Add to cart€32
This multi-part plastic kit contains the parts necessary to assemble one orruk Megaboss, covered in nailed-on iron armour, armed with a boss choppa and rip-tooth fist. Fourteen components are included, along with a Citadel 60mm Round base.
Ironjawz: Orruk Weidnob Shaman

Out of stock
This multi-part plastic kit contains the components necessary to assemble one Weirdnob Shaman, the bizarre and unpredictable wizard of the Ironjawz. Posed in a twitching, staggering stance as the power of the Waaagh! flows through him, he’s covered in detailed shamanic fetishes and is armed with a smouldering Waaagh! staff. 13 components, supplied with a Citadel 40mm Round base.
Gloomspite Gitz
Gloomspite Gitz: Rockgut Troggoths

Add to cart€43
This kit allows you to build and customise three Rockgut Troggoths, featuring a huge host of components and interchangeable parts that allows you to make each one unique. With loads of heads, weapons and poses, you’ll be able to field a full army of these brutes without any two looking the same.
This kit contains 91 components and is supplied with 3 x 50mm round bases.
Beastclaw Raiders
Start Collecting: Beastclaw Raiders

Add to cart€60
This is a great-value box set that gives you an immediate collection of fantastic Beastclaw Raiders miniatures, which you can assemble and use right away in games of Warhammer Age of Sigmar! You’ll receive:
- a Stonehorn – this can be assembled with a mounted Frostlord, Huskard or Beastriders, with chaintrap, frostspear and harpoon launchers as weapon options, or can be optionally assembled as a Thundertusk;
- a Mournfang Pack, made up of 4 ogors riding fearsome Mournfangs wielding a selection of ironlock pistols, culling clubs and prey hackers.
Included in the box is an exclusive Warscroll Battalion rules sheet – Loshar's Frost Guard – allowing you to collect, assemble and play with your new miniatures right away!
Gutbusters
Gutbusters: Ogre Leadbelchers

This multi-part plastic set contains 107 components with which to build four Leadbelchers armed with Leadbelcher guns. The set comes with plenty of optional extras including powder Grots and plenty of spiky ammunition to ram into the cannons.

These models are supplied with four 40mm square bases and they are supplied unpainted and require assembly - we recommend using Citadel Plastic Glue and Citadel Paints.