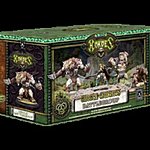 The battle group contains a core rules booklet, an in-depth tutorial, and a full battlegroup, everything you need to jump right into the game. For already existing players it contains a brand new exclusive warlock to add to your collection. The models are made from high quality, easy to build, faction coloured plastic and look amazing. The sets also provide all the gaming essential needed to play, dice, tokens as well as a gaming mat and a measuring rule. Begin your journey with the Circle Orboros today!
The miniatures included are Tanith the Feral Song, a Gorax light warbeast, one Wild Argus light warbeast and one Pureblood Warpwolf heavy warbeast, as well as 5 colour stat cards to help you use them in game. 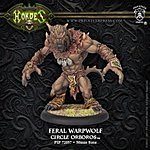 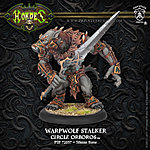 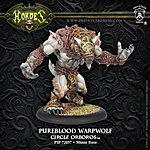 The mysterious druids of Orboros use vicious Warpwolves to sow death and destruction among the ranks of the enemy. Born human, these beasts were transformed into huge, muscular creatures by the powers of Orboros. They attack hard and fast, slaying enemy units in great swathes, giving them little time to counter-attack.
This Boxed Set contains 1 plastic miniature which is able to be assembled as either a Feral, Pureblood, or Stalker Warpwolf. This model is supplied unpainted, and assembly may also be required. 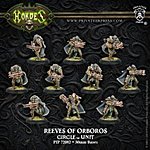 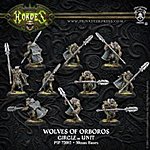 Drawn from the settlements on the fringes of the wilderness, the Wolves of Orboros offer their strength of arms to the circle willingly. With every Wolf being a master woodsman as well as an accomplished fighters and well trained with a heavy cleft-bladed spear these are able to find deadly angles of attack in even the densest brush.
This box set includes two colour stat cards and all the components to assemble either 10 Reeves of Orborosone or 10 Wolves of Orboros in plastic 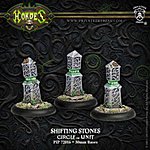 Out of stock
Shifting stones are fulcrums of natural power that tap into the pervading essences of Orboros to alter the flow of battle radically. Their mysterious power allows them to bathe nearby allies in raw life essence, sink quickly into the earth and rise again wherever they are needed, or send another creature to a completely different area of the battlefield.
This Blister contains 3 metal miniatures.
Circle Gallows Groves 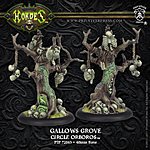 An ancient manifestation of the conscious will of the Devourer Wurm, the gallows grove flourishes on soil soaked in the blood of sacrifice and violent massacres. Possessing an unsettling approximation of sentience, these gnarled trees might vanish only to reappear where the blood flows most freely. Powerful druids of the Circle are able to feed their will into these conduits of power and then unleash it upon those marked for death. The very presence of these trees saps vitality from the living as wounds gape wide to pour blood upon the thirsty roots of their destroyers.
This Blister contains 2 metal miniatures. 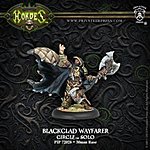 Out of stock
Druid wayfarers act as the messengers of the omnipotents, assassins in the shadows and heralds of the Circle's armies. Moving along ley lines with unparalleled ease, these warriors of Orboros can rend their enemies with blasts of elemental power, crush them with their massive voulges, or awaken their slumbering predator spirit and watch them turn on each other like mindless savages.
This blister pack contains 1x Circle Orboros Blackclad Wayfarer.
Circle Baldur The Stonecleaver 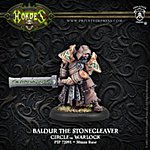