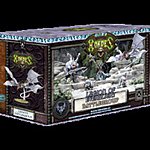 The Legion of Everblight Battle Group is the perfect set to introduce you to the Game of HORDES, the Legion of Everblight faction and have a playable army straight out of the box.
The battle group contains a core rules booklet, an in-depth tutorial, and a full battlegroup, everything you need to jump right into the game. For already existing players it contains a brand new exclusive warlock to add to your collection. The models are made from high quality, easy to build, faction coloured plastic and look amazing. The sets also provide all the gaming essential needed to play, dice, tokens as well as a gaming mat and a measuring rule. Begin your journey with the Legion of Everblight today!
The miniatures included are Kryssa Conviction of Everblight, Two Shredder lesser warbeasts, one Nephilim Bolt Thrower light warbeast and one Neraph heavy warbeast, as well as 6 colour stat cards to help you use them in game. 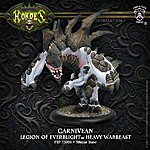 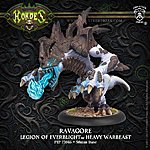 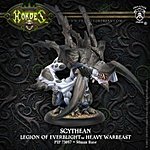 Add to cart€34
The warlocks that serve the dragon Everblight can call upon a myriad of dragon spawn, each a perfect engine of draconian destruction.
The Carnivean, an ancient and favoured dragon spawn, shreds flesh, bone, and steel with its mighty claws and a shark-like maw.
The Ravagore engulfs foes in gouts of blighted fire, emulating the fearsome breath of its progenitors.
Terrifying in its brutal simplicity, the sickle-armed Scythean is another ancient breed created to single-mindedly destroy any who oppose its masters will.
This Boxed Set contains 1 plastic model - which is able to be constructed as either a Carnivean, Ravagore, or Scythean.
Legion Blighted Nyss Archers/Swordsmen 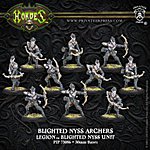 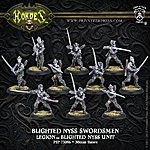 Blocking out the sun in a hail of shots as the battle begins, blighted Nyss archers rain down an unending deluge of deadly arrows on the enemy and their fortifications. The the Blighted swordsmen, who have undergone much training and practice with their weapons to become one with their prized blades and move in after the storm to demolish and finish off anything left of the demoralized and crippled foe.
This box contains ten plastic miniatures, bases and 2 stat cards, models made up of 1 leader and 9 grunts. The miniatures can be made in to either type of unit and a player may field any number of Blighted Nyss Archer or Blighted Nyss Swordsmen units in a Legion of Everblight army. 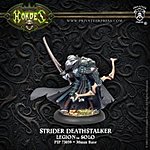 Some few striders rise above the ranks of their peers as precision instruments of death. Deathstalkers range ahead at the vanguard of Everblight's armies and regularly embark on extended scouting missions where Legion warlocks entrust them to their own supervision and the leadership of subordinate striders. 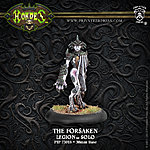 Add to cart€7.50
Twisted beyond recognition, the Forsaken are the malignant children of the dragon's accursed touch, and their very presence is anathema to life. They feed upon the rage and misery of the battlefield and can mimic their master's burning aura to generate a mantle of blighted essence so overwhelming they can strike the living dead by mere proximity. This blister pack contains 1 x Legion of Everblight Forsaken.
Images originating from the Privateer Press website are © 2001—2018 Privateer Press, Inc. All Rights Reserved. WARMACHINE ®, HORDES, and their logos are trademarks of Privateer Press, Inc. Images and trademarks used without permission. This website is unofficial and is not endorsed by Privateer Press.