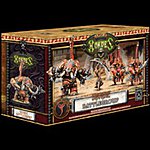 The Skorne Battle Group is the perfect set to introduce you to the Game of HORDES, the Skorne faction and have a playable army straight out of the box.
The battle group contains a core rules booklet, an in-depth tutorial, and a full battlegroup, everything you need to jump right into the game. For already existing players it contains a brand new exclusive warlock to add to your collection. The models are made from high quality, easy to build, faction coloured plastic and look amazing. The sets also provide all the gaming essential needed to play, dice, tokens as well as a gaming mat and a measuring rule. Begin your journey with the Skorne today!
The miniatures included are Beast Master Xekaar, a Cyclops Raider light warbeast, one Cyclops Savage light warbeast and one Titan Gladiator heavy warbeast, as well as 5 colour stat cards to help you use them in game. 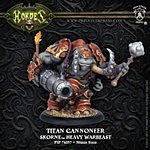 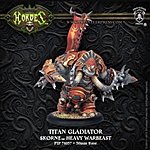 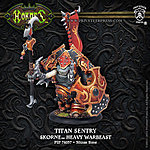 The Titan is a versatile warbeast - able to be trained and conditioned to many battlefield roles. For example;
-The Gladiator has a heavily armoured body and huge spiked gauntlets with which it charges into the enemy, pulverizing enemy troops and warbeasts underfoot.
-The Cannoneer takes the role of a mobile siege engine - blasting at enemy fortifications with a huge siege cannon.
-The Titan Sentry is a huge, armoured roadblock - immune to all but the most powerful of enemy attacks, it stands firm against all who dare to approach, hiding behind a heavy shield and thick armour.
This Boxed Set contains 1 plastic model which may be modelled to represent either a Skorne Titan Gladiator, Cannoneer, or Sentry. 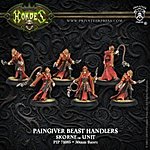 Goading and pushing the warbeasts of Skorne onto impossible feats of strength and endurance with their whips and wicked blades, the paingivers are completely loyal to their Warlock. Any Skorne force that has warbeasts needs paingivers and every Skrone force should have warbeasts. Contains 6 metal miniatures. 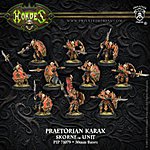 Enemy blades deflect away and barrages of artillery fire wash over the Praetorians Karax as these warriors march towards battle. These highly protected men guard themselves and those behind them by being covered in mighty armour and carry interlocking shields that sweep aside all incoming blows. They no longer fight as an individual as endless tactical training has turned them into one cohesive combat machine. This set gives you all the parts to make 10 highly detailed plastic miniatures. 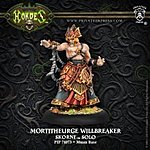 Out of stock
Mortitheurges - known as Willbreakers, are used to enslave the minds of enemy soldiers and to control the mighty Warbeasts which accompany the forces of Skorne to battle. Any enemy soldier who enters the battlefield opposite a Willbreaker faces only one certainty - uncertainty itself. His own weapons might be turned against his allies or even himself. Few things are more frightening than complete loss of control. The Blister contains one metal miniature.
Images originating from the Privateer Press website are © 2001—2018 Privateer Press, Inc. All Rights Reserved. WARMACHINE ®, HORDES, and their logos are trademarks of Privateer Press, Inc. Images and trademarks used without permission. This website is unofficial and is not endorsed by Privateer Press.