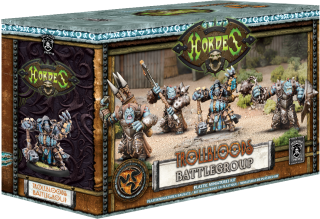 The Trollblood Battle Group is the perfect set to introduce you to the Game of HORDES, the Trollblood faction and have a playable army straight out of the box.
The battle group contains a core rules booklet, an in-depth tutorial, and a full battlegroup, everything you need to jump right into the game. For already existing players it contains a brand new exclusive warlock to add to your collection. The models are made from high quality, easy to build, faction coloured plastic and look amazing. The sets also provide all the gaming essential needed to play, dice, tokens as well as a gaming mat and a measuring rule. Begin your journey with the Trollblood today!
The miniatures included are Ragnor Skysplitter the Runemaster, a Troll Axer light warbeast, one Troll Bouncer light warbeast and one Troll Impaler light warbeast, as well as 5 colour stat cards to help you use them in game. 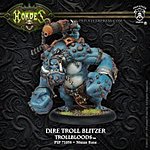 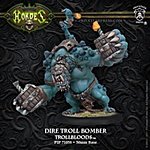 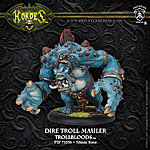 Although dangerous and unpredictable, the powerful dire trolls serve their trollkin allies in a variety of battlefield roles. The dire troll mauler is a creature of savage simplicity, devastating enemies with nothing more than its gigantic fists and unearthly strength. The dire troll blitzer totes a rapid-fire slugger cannon and its pyg gunner into combat on its back, adding a lethal spray of lead to the crushing blows of its mighty fists. The dire troll bomber hurls barrels of explosives at the enemy before pulverizing them in melee combat. This Boxed Set contains 1 plastic miniature kit capable of making either a Bomber, Blitzer or Mauler. 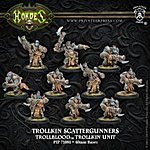 These more heavily armed and armoured Trollkin can be found at the forefront of battle. Shredding the enemy forces limb from limb using high explosive shrapnel fire from mass cannon guns. This set is a great addition to any Trollkin Hordes collection, a great support force to help clear the battlefield during any battle for a existing Hordes player and fun models to paint for any model painter. This set contains 10 highly detailed plastic miniatures that come unpainted and assembly will be required. 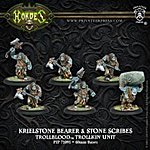 The Krielstones, sacred monuments of stored spiritual energy used during battle. Only the mightiest Trollkin take up the charge to carry the Krielstones in to the fray, the stones providing the bearer added protection as their radiating aura surrounds them. Documenting the great deeds of these warriors, the scribes chronicle the acts of those they follow while capturing the power from the relics in their scrolls. This set is a fantastic unit to any Tollkin Hordes collection, a great new force to enhance any existing Trollkin player and great models for any collector to paint. This set contains 6 detailed resin and white metal miniatures. 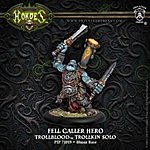 Add to cart€13
Few Trollkin warlocks willingly take the field without one of these peerless warriors. Incarnations of their culture, Fell Callers serve as rallying points that bolster their fellows with powerful fell calls and lay their enemies low with paired swords. No Trollkin can resist following when a Fell Caller drives deep into the enemy.
Images originating from the Privateer Press website are © 2001—2018 Privateer Press, Inc. All Rights Reserved. WARMACHINE ®, HORDES, and their logos are trademarks of Privateer Press, Inc. Images and trademarks used without permission. This website is unofficial and is not endorsed by Privateer Press.