Add to cart€75
This is a great-value box set that gives you an immediate collection of fantastic Skitarii miniatures, which you can assemble and use right away in games of Warhammer 40,000! You’ll receive a Tech-Priest Dominus, an Onager Dunecrawler and a set of ten Skitarii Vanguard, which can be optionally assembled as Skitarii Rangers!
Adeptus Mechanicus: Skitarii 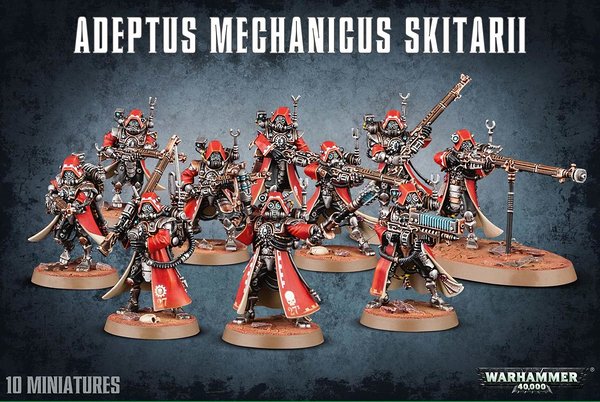 Add to cart€31
This multi-part plastic kit contains everything needed to make either ten Skitarii Rangers or ten Skitarii Vanguard. Included in the box are 124 components - twenty-three heads, eleven of which are Skitarii Rangers, twenty-five weapons, a small transfer sheet one Citadel 60x35.5mm Oval Base and ten Citadel 25mm Round Bases.
Adeptus Mechanicus: Sicarians

Add to cart€34
This multi-part plastic kit contains all the parts necessary to build five Adeptus Mechanicus Sicarians - either Sicarian Ruststalkers or Sicarian Infiltrators, including one princeps. Each model features extensive body modification - flesh has given way to machine, and what little remains is encased in pressurised armour. Sensors, pressure gauges and data arrays cover their surfaces, and an included five sets of legs add a variety of posing options, making your squad truly your own.
The Sicarian Infiltrators are the scout class; almost their entire human heads have been replaced with an intricate domed helm allowing a three-hundred and sixty degree view of the battlefield. Two weapon options are available to each model - ten sets of stubcarbine and power sword, or ten sets of taser goad and flechette blaster; a total of twenty weapons in the box. Their princeps carries a stubcarbine and power sword, with an included infoslave skull - every movement recorded and analysed for the optimisation of battle.
The box contains 117 components, and is supplied with five 40mm Round bases.
Adeptus Mechanicus: Electro Priests 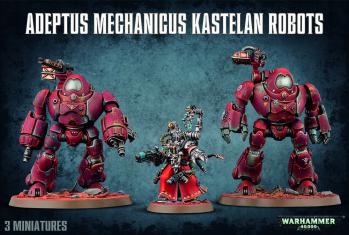 Add to cart€41
This multi-part, 80-component plastic kit contains all the parts necessary to build either one Ironstrider Ballistarius or a Sydonian Dragoon, and features a small transfer sheet and a 105x70mm oval base.
Adeptus Mechanicus: Kataphron Battle Servitors 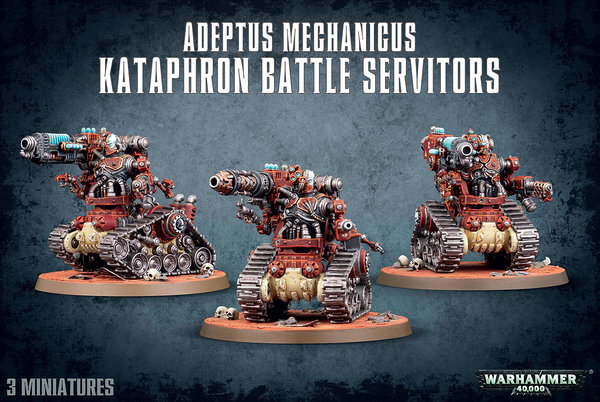 Add to cart€44
This multi-part plastic kit contains an impressive 157 components, with which you can make three Battle Servitors, either Kataphron Destroyers or Kataphron Breachers. Supplied are three Citadel 60mm Round Bases.
Adeptus Mechanicus: Onager Dunecrawler 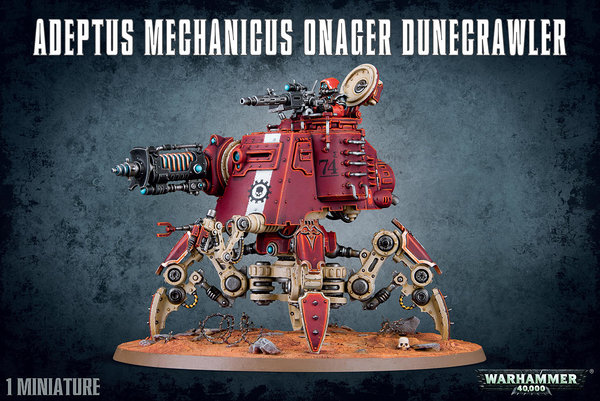 A light walking tank, the Onager Dunecrawler features four crab-like legs with optional armour plating. The armoured cabin and reactor are complemented by a huge variety of modelling options, with searchlights, smoke launchers, cognis manipulators and mindscanner probes; and the cupola can be modelled closed or open, featuring a Princeps wielding a heavy stubber. You get a massive amount of configuration and customisation available even before applying weaponry.

On the subject of weaponry, included in the box are four variants: an eradication beamer, twin phosphor blasters with sensors, a neutron laser featuring a coaxial cognis heavy stubber or an Icarus array - an awesome anti-air assault package comprising twin autocannons, a gatling flak launcher, an armour-piercing missile launcher and a radar dish.

Included with this 119-component multi-part plastic kit, making one Onager Dunecrawler, is a small Adeptus Mechanicus transfer sheet and a 130mm round base.