Add to cart€30
Codex: Astra Militarum contains a wealth of background and rules – the definitive book for Astra Militarum collectors. Within this 144-page hardback, you’ll find:
Background
- Hammer of the Emperor: the origins of the Astra Militarum – dating back to the Great Crusade – with details of their structure and organisation, the methods of recruiting (some more humanitarian than others…), their training and deployment;
- A Galaxy of War: an annotated map of the current state of the galaxy, with key war zones where the Astra Militarum battle;
- Detailed background and colour schemes of the Astra Militarum regiments of Cadia, Catachan, Armageddon, Vostroya, Vahalla and Tallarn;
- Regiments of Distinction: background on 12 regiments – Armageddon Ork Hunters, Athonian Tunnel Rats, Miasman Redcowls, Mordian Iron Guard, Tanith First and Only, Savlar Chem-Dogs, Ventrillian Nobles, Indigan Praefects, Mordant Acid-Dogs, Faeburn Vanquishers, Truskan Snowhounds and Vresh Grenadiers;
- Heroes Beyond Number: a history of the major battles fought by the Astra Militarum;
- Background and details on each character, vehicle and unit available to an Astra Militarum army;
- A showcase of beautifully painted Citadel miniatures, depicting the colour schemes of several regiments painted by the renowned ‘Eavy Metal team – including expertly-converted models showing you how to represent the more esoteric regiments on the gaming table.
Rules
Everything you need to get an Astra Militarum army primed for games of Warhammer 40,000 is in here:
- 56 datasheets containing rules for every Astra Militarum unit and vehicle;
- Army abilities reflecting the Astra Militarum’s methods of war, including Astra Militarum Orders and Regimental Orders;
- Armoury of the Imperium: wargear both ranged and close-combat used by the Astra Militarum;
- Points values for all miniatures, weapons and wargear for use in Matched Play games;
- Bulwark of Humanity: rules for Battle-forged armies:
- Regimental Doctrines for Cadian, Catachan, Valhallan, Vostroyan, Armageddon, Tallarn, Mordian, Militarum Tempestus Regiments;
- 6 unique Warlord Traits,
- 25 Stratagems, with 8 specific to the Regiments named above;
- the Heirlooms of Conquest: a selection of rare wargear;
- The Psykana psychic discipline, available to any Astra Militarum model with the Psyker keyword,
- 6 Warlord Traits for use by any Warlord, with a further specific to the above-named Regiments;
- 6 unique Tactical Objectives.
Start Collecting: Astra Militarum 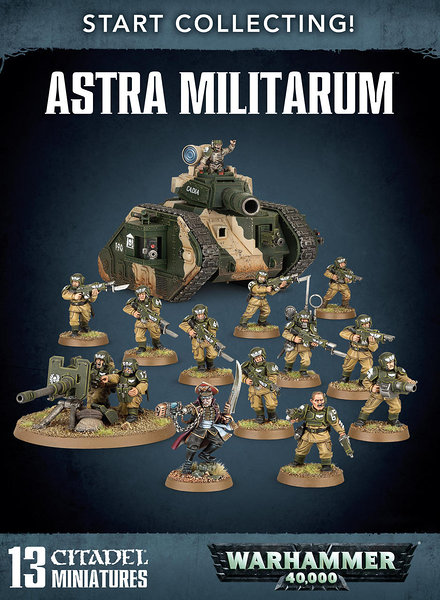 Add to cart€65
This is a great-value box set that gives you an immediate collection of fantastic Astra Militarum miniatures, which you can assemble and use right away in games of Warhammer 40,000! You’ll receive a Leman Russ Battle Tank, a Cadian Heavy Weapon Team, an Officio Prefectus Commissar and a set of ten Cadian Shock Troops. 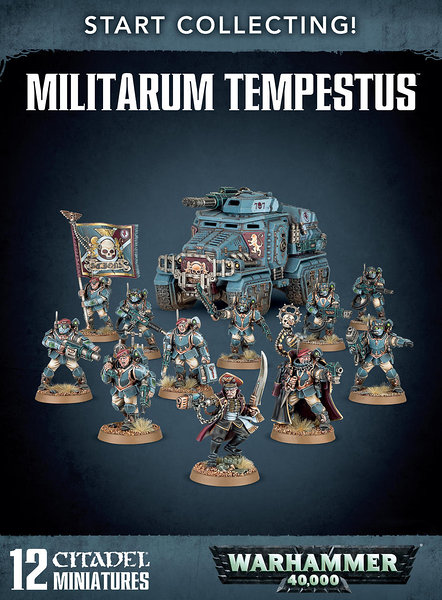 Add to cart€75
This is a great-value box set that gives you an immediate collection of fantastic Militarum Tempestus miniatures, which you can assemble and use right away in games of Warhammer 40,000! You’ll receive a ten-man set of Scions (assemblable as a 5-man squad and a 5-man Scions Command Squad), an Officio Prefectus Commisar and a Taurox Prime.

Out of stock
This blister contains one finely-detailed metal Primaris Psyker. Model supplied with a 25mm round base.
Astra Militarum: Tech-Priest Enginseer 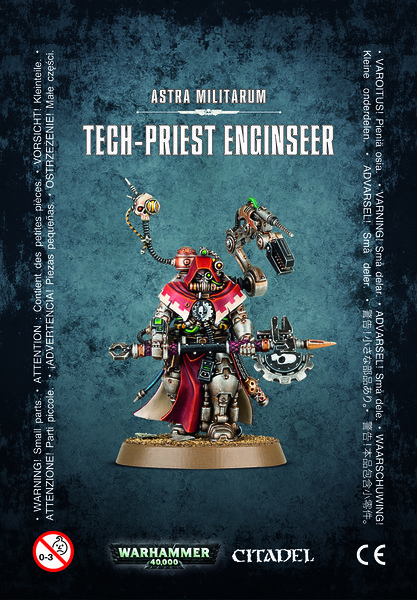 Add to cart€21
This multi-part plastic kit contains all the components necessary to assemble one Tech-Priest Enginseer, armed with a cog axe, censer and holstered pistol. Supplied with a Citadel 32mm Round base. 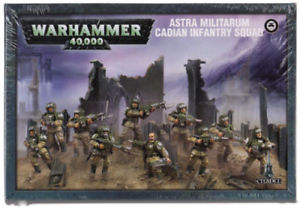 Out of stock
This box set contains five multi-part plastic Cadian Command Troopers. This 79-piece kit contains enough components to enable you to assemble five specialist troopers, including: an Officer, a Medic, a Special Weapon Trooper, a Vox-caster and a Guardsman with Company Banner. The squad can be armed with a choice of weapons including: a sniper rifle, a heavy flamer, a plasma gun, a grenade launcher, a flamer, a melta gun, a powerfist, a chainsword, a power sword, a plasma pistol, a bolt pistol and a laspistol. Also included are two different Company Banners, nine different guardsman heads and additional pieces to allow you to customise the rest of your Imperial Guard squads. Models supplied with 25mm round bases.
Astra Militarum: Cadian Heavy Weapon Squad 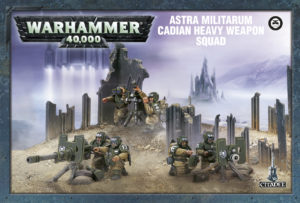 Out of stock
This multi-part plastic set enables you to build 3 Cadian Heavy Weapons Teams. Each team of two can be equipped with any one of the following weapons: lascannon, heavy bolter, missile launcher, autocannon or mortar. It is possible to give all teams the same heavy weapons to build a support squad.
Astra Militarum: Tempestus Scions 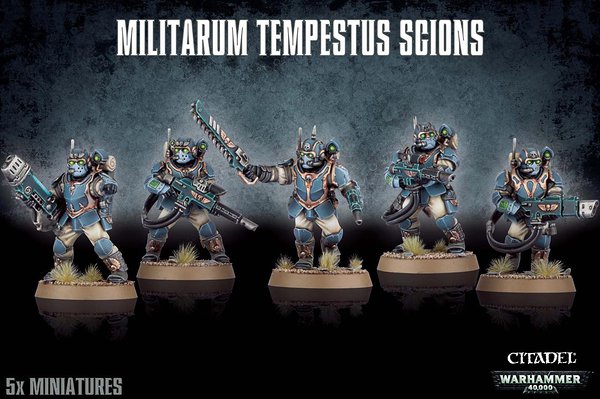 Add to cart€28
This box contains everything you need to make a 5 man Militarum Tempestus Scions squad armed with hot-shot lasguns. You have the option to use a combination of 17 heads (8 with respirators and 9 with berets) and ammo pouches, knives, grenades and canteens to fully customise your miniatures.
If you choose to build a squad of Tempestus Scions you have the option to upgrade 1 model to be a Tempestor. The Tempestor has a fantastic array of weapons options. The right hand can be equipped with a powerfist, chainsword or power sword, and you can choose to upgrade the left handed laspistol to a bolt pistol or a plasma pistol.
You have the option to replace the hot-shot lasguns with a choice of five additional special weapons: a plasma gun, meltagun, grenade launcher, flamer or hot-shot volley gun. This kit also includes a vox-caster backpack which allows one of your Tempestus Scions to fulfil the role of Vox-cast operator.
This kit can also be assembled as a Tempestus Scions Command Squad. It is supplied unpainted and requires assembly - we recommend using Citadel Thin Plastic Glue and Citadel Paints.
Astra Militarum: Auxilla Bullgryns 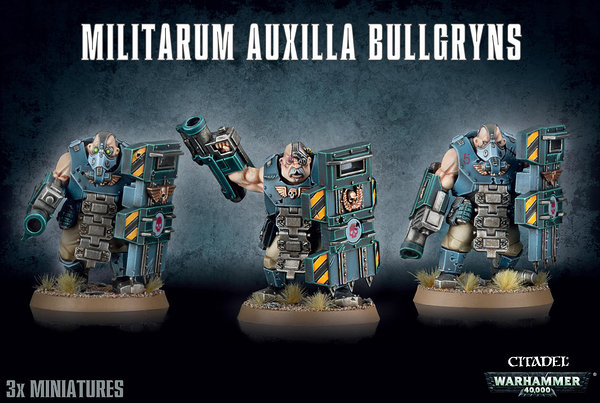 This multi-part plastic kit makes 3 Bullgryn miniatures which can be armed with either grenadier gauntlets and slab shields or battle mauls and suppression shields. Why not make one Bullgryn into a Bone ‘ead? These natural leaders have distinctive metal plated heads so they really stand out in the unit.

These miniatures can be assembled with bare head or with gas mask as either Militarum Auxilla Bullgryns or Ogryns. You also have the option to make the special character Nork Deddog.

Add to cart€23
This box set contains one multi-part plastic Imperial Guard Sentinel. This 59-piece kit has fully articulated legs, allowing for endless poses; contains all of the components to make either an Armoured or Scout Sentinel, and includes two Cadian and two Catachan pilot heads. Also supplied are all of the weapon variants mountable on a Sentinel, including: a multi-laser, a heavy flamer, an autocannon, a lascannon, a plasma cannon and a missile launcher. Model supplied with a 60mm round base.
Astra Militarum: Chimera

Add to cart€41
This kit is supplied in 98 plastic components and includes an Astra Militarum transfer sheet, which can be used to add markings and insignia. It can alternatively be assembled as a Leman Russ Punisher or Executioner.
Astra Militarum: Hydra 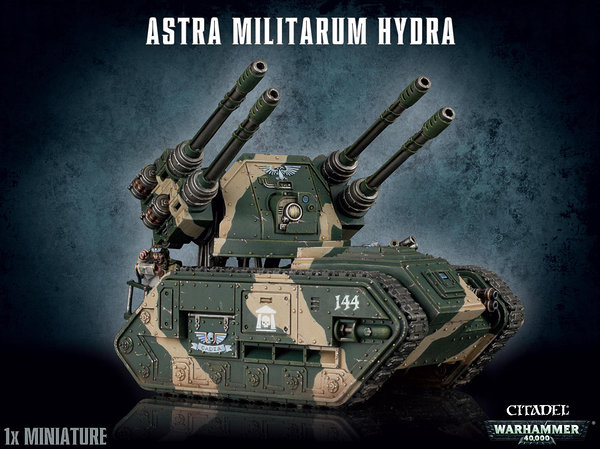 Add to cart€43
This plastic kit can be assembled as either a Hydra or a Wyvern with 2 crewmen: a gunner and a spotter and has the option to equip a heavy bolter or a heavy flamer. 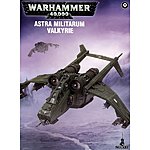 Add to cart€58
This box set contains one multi-part plastic Imperial Guard Valkyrie. This 128-piece, finely-detailed, miniature can be assembled in a number of ways and with a number of weapon options, including: rocket pods, a lascannon, a multi-laser, Hellstrike missiles and pintle mounted heavy bolters. Model supplied with a large oval base and an all-new clear-plastic flying base that will secure it in a heightened flying position.