Add to cart€30
Codex: Chaos Daemons contains a wealth of background and rules – the definitive book for Chaos Daemons collectors. Within this 144-page hardback, you’ll find:
- The Chaos Gods & Their Infernal Legions: descriptions of the warp, the maddening realm that the Chaos Gods call home, and of the major Chaos Gods – Khorne, Slaanesh, Tzeentch and Nurgle – along with their servants, the Chaos Daemons;
- Examples of the compositions of daemonic forces for the 4 Chaos Gods – the Scintillating Legions, the Plague Legions, the Blood Legions and the Legions of Excess;
- Galactic Corruption: a map showing the impact of the Great Rift, from which the malign energies of the warp pour into realspace, with details of warp storms, Chaos strongholds and daemon worlds;
- Chaos Rising: a brief history of major warp-based catastrophes and daemonic incursions – at least, the few that remain on-record…
- Background and details on each character and unit available to a Chaos Daemons army;
- A showcase of beautifully painted Citadel miniatures, with example armies featuring everything from individual images of models to battle scenes on terrain.
Rules
Everything you need to get a Chaos Daemons army primed for games of Warhammer 40,000 is in here:
- 50 datasheets, providing rules for every Chaos Daemons unit and miniature;
- Army abilities reflecting Chaos Daemons’ methods of war on the tabletop;
- Daemonic Gifts: wargear both ranged and close-combat for use by Chaos Daemons;
- Points values for all miniatures, weapons and wargear for use in Matched Play games;
- The Eternal Hordes: rules for Battle-forged armies, including:
- 19 unique Stratagems – 7 usable by any Chaos Daemons and 3 each for Khorne, Nurgle, Tzeentch and Slaanesh;
- 24 unique Warlord Traits: 6 each for Khorne, Nurgle, Tzeentch and Slaanesh;
- Hellforged Artefacts: 15 weapons and artefacts available only to Chaos Daemons;
- 21 psychic powers: 6 each for Nurgle, Tzeentch and Slaanesh, along with 3 Dark Hereticus powers for an army fielding Be’lakor;
- 6 unique Tactical Objectives.
Chaos Daemon Prince

This multi-part plastic kit contains all the parts necessary to assemble one Daemon Prince. This 34-piece set includes: three head variants, three different weapon arms, wings and a host of other assembly options, and is supplied with one Citadel 60mm Round base. 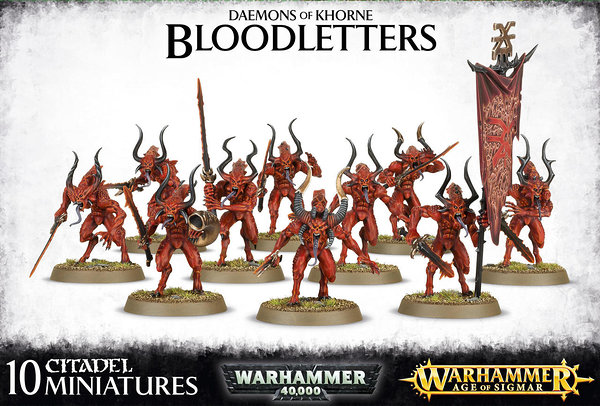 Add to cart€23
This plastic box set contains 10 complete miniatures. These finely detailed plastic kits contain a host of extra parts and accessories, enabling you to assemble your Bloodletters in a large variety of ways. Includes ten Citadel 32mm Round bases.
Daemons Of Tzeentch
Start Collecting: Daemons Of Tzeentch

Out of stock
This is a great-value box set that gives you an immediate collection of fantastic Daemons of Tzeentch miniatures, which you can assemble and use right away in games of Warhammer Age of Sigmar and Warhammer 40,000! You’ll receive a Burning Chariot of Tzeentch (with optional Herald of Tzeentch on foot), 3 Flamers of Tzeentch, 3 Screamers of Tzeentch and 10 Pink Horrors.
Daemons Of Tzeentch: Blue Horrors

Out of stock
This multi-part plastic kit contains the components necessary to assemble 10 pairs of Brimstone Horrors of Tzeentch. Tiny creatures of pure malice, they caper about on their bases just as you would expect those made of fire to do. Also included are the parts you need to make 10 Blue Horrors of Tzeentch. Eyes full of fury and large mouths full of teeth, some pose with their talons outstretched to hack at their foe, others wield magical flames that dance about their fingertips. Covered in decorations, jewellery and feathers, they also include flames for their bases.
Daemons Of Tzeentch: Tzaangors

Out of stock
This multi-part plastic kit contains the components necessary to assemble 10 Tzaangors, bedecked head to foot in the avian symbolism of Tzeentch. These models have a huge amount of customisation available:

Out of stock
This is a great-value box set that gives you an immediate collection of fantastic Daemons of Nurgle miniatures, which you can assemble and use right away in games of Warhammer 40,000! You’ll receive a Herald of Nurgle, a set of three Plague Drones, a set of three Nurglings and a set of ten Plaguebearers of Nurgle.
Daemons Of Slaanesh
Daemons of Slaanesh: Fiends

Out of stock
This kit builds 3 Fiends of Slaanesh, and includes options to turn one of them into a Blissbringer. It is supplied in 63 plastic components, and comes with 3 x 75mm oval bases.