Add to cart€30
Codex: Necrons contains a wealth of background and rules – the definitive book for Necrons collectors. Within this 120-page hardback, you’ll find:
- In the Beginning: the origin of the Necrons, from the Necrontyr race of flesh and blood that existed billions of years ago, their bitter civil war, the pact with the C’tan which doomed them to immortality and the order which set them to their Great Sleep;
- The Great Awakening: the manner in which the tomb worlds are awakening into the 41st Millennium – some early, some late, others not at all – and the Necrons’ first, violent actions upon rousing;
- The Necron Dynasties: descriptions of the complex, rigid hierarchies of the Necrons, with details and icons of the following 8 dynasties: Sautekh, Charnovokh, Nephrekh, Thokt, Mephrit, Novoth, Ogdobekh, and Nihilakh;
- A galactic map featuring both active and (currently) dormant tomb worlds, crown worlds and dynastic territories;
- Domains of the Phaerons: organisation of the tomb worlds, and the manner in which the Necrons wage war;
- Dynastic Markings: illustrated examples of how Necrons use markings on their soldiers, including hieroglyphs used on war machines. Includes colour schemes and background for the following 9 dynasties: Sautekh, Mephrit, Nephrekh, Nihilakh, Novokh, Thokt, Charnovokh, Nekthyst, and Ogbobekh;
- A New Epoch Begins: a timeline of significant events and battles in Necron history during the 41st Millennium;
- Background on each unit available to a Necrons army;
- A showcase of beautifully painted Citadel miniatures, with example armies featuring everything from individual images of models to battle scenes on terrain.
Rules
Everything you need to get a Necrons army primed for games of Warhammer 40,000 is in here:
- 36 datasheets providing rules for using every Necrons unit in your games of Warhammer 40,000;
- Army abilities that reflect Necrons’ methods of war on the tabletop.
- Armoury of the Ancients: profiles for all weapons and wargear of the Necrons, ranged and close-combat
- Points values for all miniatures, weapons and wargear for use in Matched Play games;
- Code of War: Rules for Battle-forged armies, including:
- 5 Dynastic Codes: special rules for each of the following dynasties: Sautekh, Mephrit, Novokh, Nihilakh, and Nephrekh;
- 27 unique Stratagems, including 5 specific to the following dynasties: Sautekh, Mephrit, Novokh, Nihilakh, and Nephrekh;
- Powers of the C’tan: a choice of 6 powers that can be used for each C’tan Shard unit in your army, generated before battle;
- Artefacts of the Aeons: 13 weapons and artefacts available only to Necrons;
- 6 unique Warlord Traits for the Necrons, with 5 additional Warlord Traits, one specific to each of the following dynasties: Sautekh, Mephrit, Novokh, Nihilakh, and Nephrekh;
- 6 Tactical Objectives unique to the Necrons.
Start Collecting: Necrons

Out of stock
This is a great-value box set that gives you an immediate collection of fantastic Necrons miniatures, which you can assemble and use right away in games of Warhammer 40,000! You’ll receive a Necron Overlord, an Annihilation Barge with Lord On Foot (which can be built as a Catacomb Command Barge), 12 Necron Warriors, 3 Scarab Swarms and 5 Immortals (which can be built as Deathmarks.)
Necron Catacomb Command Barge/ Annihilation Barge

This multi-part plastic boxed set contains 84 components, two small flying stems, one large flying base, one 25mm round base and two Necron transfer sheets, with which to build one Necron Catacomb Command Barge or one Annihilation Barge.
This kit is supplied unpainted and requires assembly - we recommend using Citadel Plastic Glue and Citadel Paints. 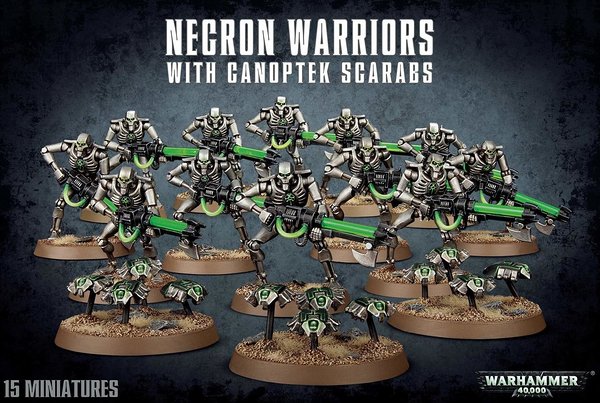 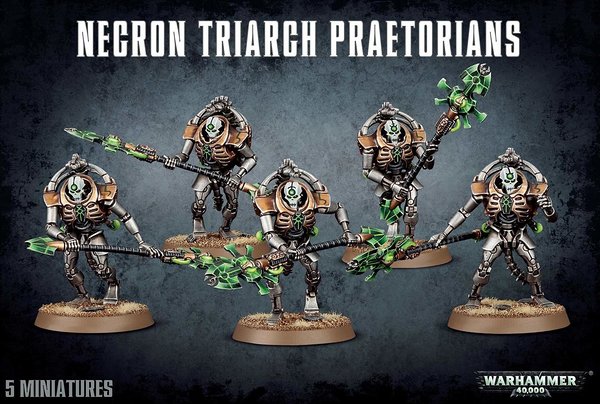 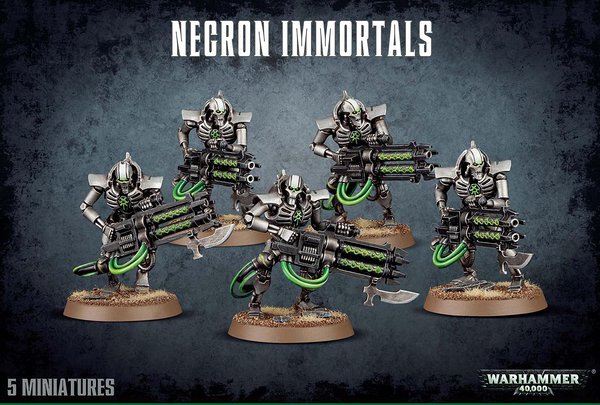 Add to cart€28
This multi-part plastic boxed set contains 30 components with which to build one Necron Canoptek Spyder. This kit comes with two ball socket stems and one large flying base. This kit is supplied unpainted and requires assembly - we recommend using Citadel Plastic Glue and Citadel Paints.