Add to cart€30
Codex: Orks contains a wealth of background and rules – the definitive book for Orks collectors. Within this 136-page hardback, you’ll find:
- The Barbarous Hordes: the history, motivations and beliefs of the Orks – a race that has avoided the angst-ridden trappings of other, more philosophical creatures by simply drawing contentment from hitting everything.
- The Green Menace: an overview of Ork society and ecology, theories on exactly how their numbers increase so quickly and details of their hangers-on – the Gretchin and Snotlings who perform menial tasks in exchange for protection.
- Greenskin Kultur: detailing Ork hierarchy, their excellence in warfare and their desire for speed and dakka, this section demonstrates the Ork way of life.
- The Ork Gods: Gork (brutal but kunnin’) and Mork (kunnin’ but brutal), gods honoured by destruction, and evoked by huge armoured war-suits designed to smash stuff up.
- Details of Ork tribes and clans, with descriptions, background and heraldry for the following: Goffs, Evil Sunz, Blood Axes, Deathskulls, Bad Moons, Snakebites, and Freebooterz.
- A selection of Ork glyphs – a list of pictorials and their meanings to help you kustomise your own Ork collection.
- Gathering the Waaagh!: war on an apocalyptic scale, Waaaghs! can swallow entire civilisations whole, gathering strength and size with every shot fired and every punch thrown. This section explains how they spontaneously erupt around particularly strong leaders.
- A galactic map showing the drastic greenskin expansion, with enormous Waaaghs! picked out in an appropriately green hue.
- A timeline of major events and battle in Ork history.
- Background on each unit available to an Ork army.
- A showcase of beautifully painted Citadel miniatures, with example armies featuring everything from individual images of models to battle scenes on terrain.
Rules
Everything you need to get an Ork army primed for games of Warhammer 40,000 is in here:
- 47 datasheets providing rules for using every Ork unit in your games of Warhammer 40,000
- Gunz and Gubbinz: profiles for all weapons and wargear of the Orks, be they ranged or close combat
- Points values for all miniatures, weapons and wargear for use in matched play games
- Ways of the Warbands – rules for Battle-forged armies, including:
- Clan Kulturs: specific rules for Goffs, Bad Moons, Evil Sunz, Deathskulls, Snakebites, Blood Axes, and Freebooterz
- Army abilities that reflect the methods of war of the Orks on the tabletop
- 26 unique Stratagems
- 6 unique Warlord Traits usable by any Ork commander, with a further 7 available to the same clans outlined in the Clan Kulturs section
- Shiny Gubbinz: 13 unique weapons and artefacts available only to Orks;
- Power of the Waaagh!: 6 psychic powers specific to Ork models with the Psyker keyword
- 6 Tactical Objectives unique to Orks
Start Collecting: Orks

Out of stock
This is a great-value box set that gives you an immediate collection of fantastic Ork miniatures, which you can assemble and use right away in games of Warhammer 40,000! You’ll receive a Painboy, five Nobz and an ammo runt, eleven Boyz and a Deff Dread.
Ork Boyz 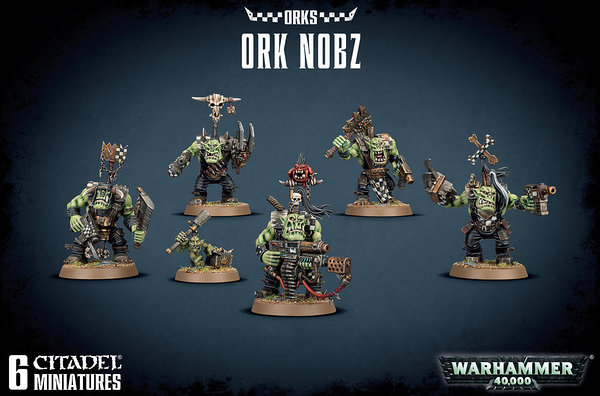 Out of stock
This box set contains five multi-part plastic Ork Nobz. This 104-piece set includes: 10 head variations, five different torso-fronts and five body variations allowing you to assemble a unique looking squad. Also included are a range of weapon options including: big choppas, power klaws, shoota/rokkit kombi-weapons, a shoota/skorcha kombi-weapon, sluggas and choppas. Additonally there are a host of extra components to allow you to further customise your squad, including parts to upgrade your Nobz with Cybork bodies and a Grot ammo runt. Models supplied with 25mm round bases.
Ork Stormboyz

Add to cart€21
This box set contains five mulit-part plastic Ork Stormboyz, including: 10 head variations, five different torso-fronts and five body variations allowing you to assemble a unique looking squad. This set contains a host of accessories and additional parts allowing to further customise your squad, and even includes a Gretchin with his very own rocket pack. Models supplied with 25mm round bases.
Ork Lootas & Burnas 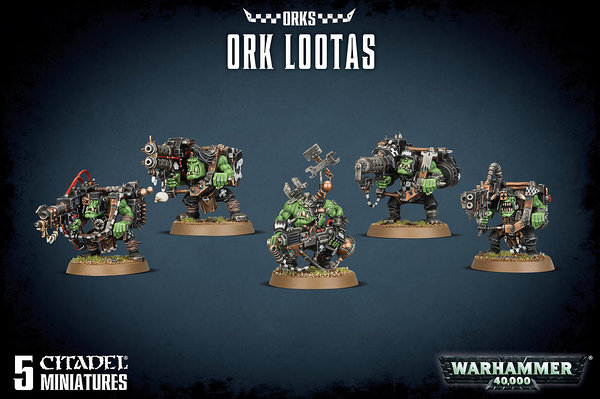 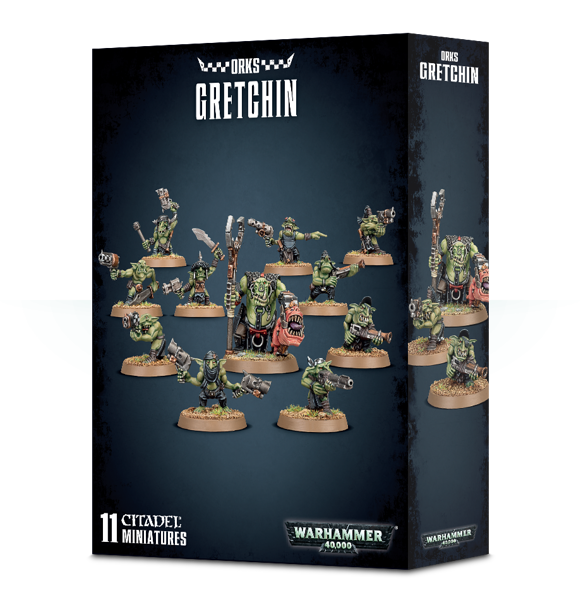