Out of stock
Codex: T’au Empire contains a wealth of background and rules – the definitive book for T’au Empire collectors. Within the 136-page hardback, you’ll find:
- A New Empire Dawns: an introduction to the T’au Empire, their attitude toward rapid expansion and the caste system of their society;
- The Rise of the T’au: an overview of the incredibly quick evolution of the T’au, and the sudden arrival of the Ethereals;
- Art of War: the ancient tactical philosophies and customs still in use by T’au warriors, and their applications to interplanetary warfare, including the arts of Kauyon and Mont’ka:
- A Destiny to Rule the Stars: the story of the T’au Empire’s expansion into the wider galaxy, including descriptions of their first contact with the Imperium, and details of the Septs of the First, Second and Third spheres of expansion;
- A map of the T’au Empire’s territories at the time of the Fifth sphere of expansion;
- The language and culture of the T’au, with a guide to names and their alphabet;
- Descriptions of the T’au Empire’s military organisation, including an example expeditionary force, markings for 21 Septs and examples of team, helmet and battlesuit markings;
- Example colour schemes for 12 Septs;
- A timeline of major events and battles in the T’au Empire’s history;
- Background on each unit available to a T’au Empire army;
- A showcase of beautifully painted Citadel miniatures, with example armies featuring everything from individual images of models to battle scenes on terrain.
Rules
Everything you need to get a T’au Empire army primed for games of Warhammer 40,000 is in here:
- 38 datasheets providing rules for every T'au Empire unit and miniature;
- Army abilities reflecting the T'au Empire’s methods of war on the tabletop;
- Arsenal of the Empire: wargear both ranged and close-combat for use by the T'au Empire;
- Points values for all miniatures, weapons and wargear for use in Matched Play games;
- Supremacy Through Unity: rules for Battle-forged armies, including:
- 25 unique Stratagems, including 6 specific to the following Septs: T’au, Sa’Cea, Vior’la, Bork’an, Dal’yth, and Farsight Enclaves
- 6 Sept Tenets: special rules for each of the following Septs: T’au, Sa’Cea, Vior’la, Bork’an, Dal’yth, and Farsight Enclaves;
- 6 unique T’au Empire Warlord Traits, along with 6 additional Sept-specific traits – 1 each for T’au, Sa’Cea, Vior’la, Bork’an, Dal’yth, and Farsight Enclaves Septs;
- Signature Systems: 12 pieces of bleeding-edge weapon and artefacts, technology available exclusively to the T’au;
- 6 unique Tactical Objectives.
Start Collecting: Tau Empire

Out of stock
This is a great-value box set that gives you an immediate collection of fantastic T'au Empire miniatures, which you can assemble and use right away in games of Warhammer 40,000! You'll receive an Ethereal on Hover Drone, three XV8 Crisis Battlesuits and a ten-man Fire Warriors team (including two drones and a DS8 Support Turret.)
Tau Empire: Cadre Fireblade

Out of stock
This plastic kit contains 9 components, one of which is a sculpted base, with which to make Cadre Fireblade.
This kit comes supplied unpainted and requires assembly - we recommend using Citadel Plastic Glue and Citadel Paints.
Tau Empire Commander 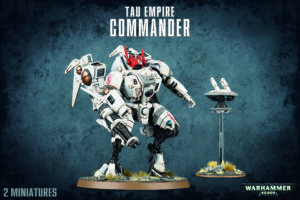 This multi-part plastic kit gives you everything you need in order to build one T'au Commander, in either an XV-85 Enforcer Armour Crisis Battlesuit or an XV86 Coldstar Battlesuit. There's an immense number of options available in the box - different heads, engines, leg and arm assemblies - and a ton of weapons! An airburst frag projector, a plasma rifle, a flamer, a fusion blaster, a cyclic ion blaster, a burst cannon (plus upgrade kit) and a missile pod. Included is a drone, which can be assembled as a gun, shield or marker drone.
Seventy seven components are included, and one Citadel 60mm Round base. 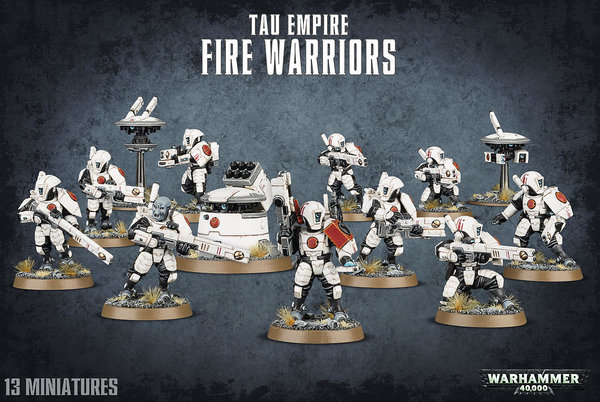 This multi-part plastic kit gives you everything you need to build ten T'au Empire Fire Warriors, in their Strike Team configuration. One model may be upgraded to a Shas'ui, and the kit includes two drones, a DS8 tactical support turret, a selection of different shoulder pads and back packs and a choice of weapons - pulse pistols, pulse carbines, EMP and photon grenades! 230 components in total, with ten Citadel 25mm Round bases, one Citadel 40mm Round base and two small flying bases.This kit can also be assembled as a Fire Warriors Breacher Team. 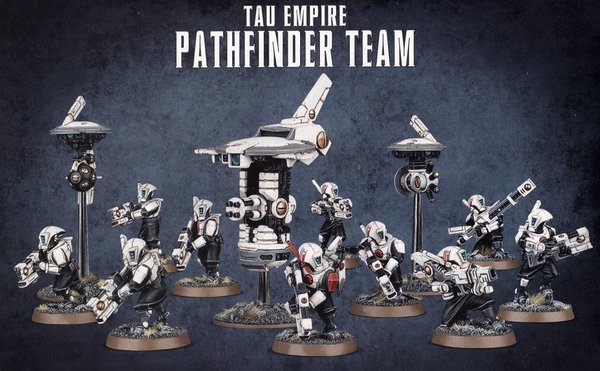 This multi-part plastic kit contains 137 components with which to make 10 T'au Pathfinders, a Pulse Accelerator Drone, a Grav-inhibitor Drone and a Recon Drone.
These kits comes supplied unpainted and require assembly - we recommend using Citadel Plastic Glue and Citadel Paints. 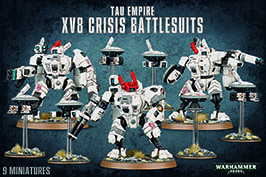 Add to cart€58
This multi-part plastic kit contains everything needed to build three XV8 Crisis Battlesuits, with six accompanying drones. There's an impressive level of customisation available, with ball fittings allowing unprecedented posability. One miniature can be optionally assembled as a Shas'vre, with special head and chest plate, and there's a prodigious amount of advanced T'au weaponry in the box: four plasma rifles, three flamers, four fusion blasters, four burst cannons, three missile pods and three shield generators. The six accompanying drones can each be built as gun, shield or marker variants and an assortment of battlesuit electronics systems are included. One model in the kit can even be built as the new, experimental Iridium-class XV8-02 Crisis Battlesuit - distinguishable by its thicker armour and aggressive appearance. Huge variety!
152 components are included in total, with three Citadel 50mm Round bases and three Citadel small Flying bases.
Tau Empire: XV88 Broadside Battlesuit

This multi-part plastic kit contains 91 components and a T'au transfer sheet with which to make a Broadside Battlesuit and two Drones.
This kit comes supplied unpainted and requires assembly - we recommend using Citadel Plastic Glue and Citadel Paints. 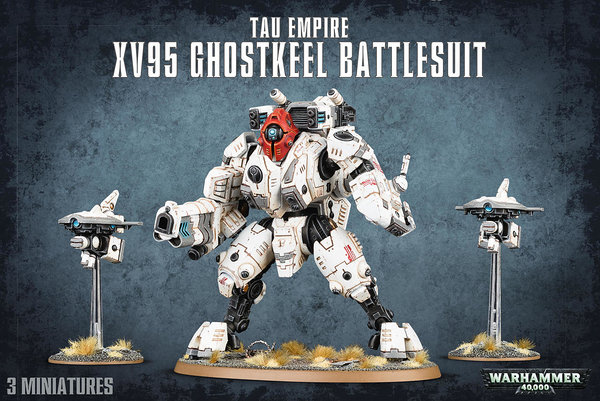 This multi-part plastic kit gives you everything needed to build one XV95 Ghostkeel Battlesuit. This miniature has a truly awesome array of modelling and posing options - arms, legs, head, engines and thrusters can all be set to different poses, and there are two different heads supplied - the head can be raised and the chest opened to reveal a male or female pilot! As well as this, you'll receive two burst cannons, two fusion blasters, two flamers, a fusion collider, a cyclic ion raker and two XV5 stealth drone field projectors. Offensively and defensively, this battlesuit is armed to the teeth!
116 components are included in total, with a Citadel 105mm Oval base. 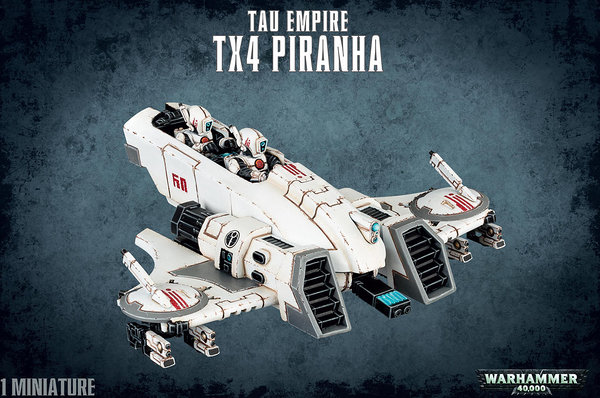 Add to cart€23
This boxed set contains 1 multi-part plastic T'au Piranha with a variety of optional parts and weapons. 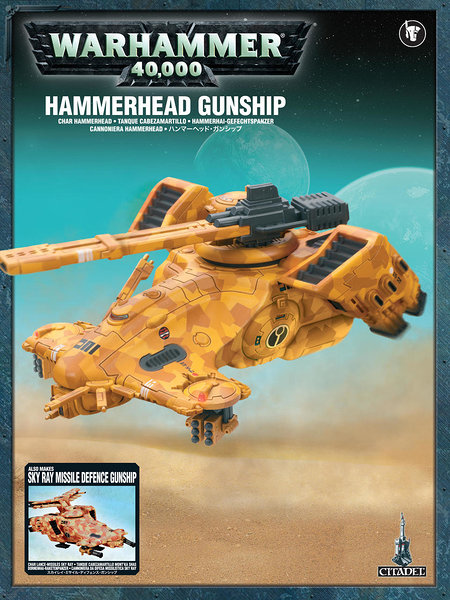 Add to cart€48
This multipart plastic kit contains 88 components and a T'au transfer sheet, and can be assembled as either a Hammerhead Gunship or a Sky Ray Gunship.
Tau Empire: KV128 Stormsurge

Add to cart€125
This multi-part plastic kit contains all the components necessary to build one KV128 Stormsurge, ballistic suit of the T'au Empire. It includes an astonishing 171 components - four head options, two pilot assemblies, a reactor suite, two leg assemblies and two sets of stabilising thrusters! Various vents and assemblies can be modelled optionally closed or open, and the whole miniature has incredible posability. Includes one Citadel 170mm Oval base.