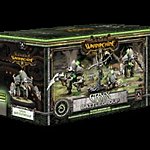 The battle group contains a core rules booklet, an in-depth tutorial, and a full battlegroup, everything you need to jump right into the game. For already existing players it contains a brand new exclusive warcaster to add to your collection. The models are made from high quality, easy to build, faction coloured plastic and look amazing. The sets also provide all the gaming essential needed to play, dice, tokens as well as a gaming mat and a measuring rule. Begin your journey with the Cryx today.
The miniatures included are Bane Witch Agathia, a Deathripper light warjack, one Slayer heavy warjack and one Reaper heavy warjack, as well as 5 colour stat cards to help you use them in game. 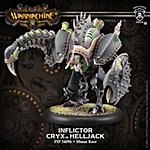 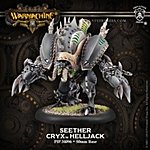 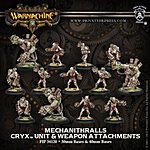 Assembled from a horrific fusion of corpses and machinery scavenged from the battlefield, mechanithralls fill the ranks of the Cryxian army. Their reanimated bodies are augmented with two heavy gauntlets powered by dark energies and steam pressure. These gauntlets greatly enhance their unliving strength; indeed, a mechanithrall's strike is nearly as powerful as the impact from a steamjack.
The Mechanithrall unit comes in a box. A player may field up to three Mechanithrall units for each warcaster in a Cryx army.
This box set contains 10 models in white metal 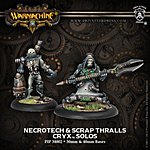 Add to cart€12.50
Necrotechs are the insidious creators of the many mechanical aberrations in the Cryx army. This foul, bloated creature scavenges wrecked warjacks in the midst of battle to acquire spare parts with which the Necrotech assembles walking, undead bombs. Contents: this blister pack contains 1x Cryx Necrotech 1x Cryx Scrap Thrall
Images originating from the Privateer Press website are © 2001—2018 Privateer Press, Inc. All Rights Reserved. WARMACHINE ®, HORDES, and their logos are trademarks of Privateer Press, Inc. Images and trademarks used without permission. This website is unofficial and is not endorsed by Privateer Press.