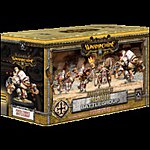 The Protectorate of Menoth Battle Group is the perfect set to introduce you to the Game of WARMACHINE, the Protectorate of Menoth faction and have a playable army straight out of the box.
The battle group contains a core rules booklet, an in-depth tutorial, and a full battlegroup, everything you need to jump right into the game. For already existing players it contains a brand new exclusive warcaster to add to your collection. The models are made from high quality, easy to build, faction coloured plastic and look amazing. The sets also provide all the gaming essential needed to play, dice, tokens as well as a gaming mat and a measuring rule. Begin your journey with the Protectorate of Menoth today!
The miniatures included are Malekus the Burning Truth, a Repenter light warjack, one Revenger light warjack and one Castigator heavy warjack, as well as 5 colour stat cards to help you use them in game. 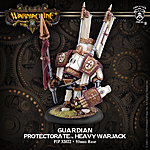 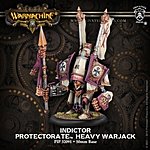 Covered in holy script and able to channel the divine power of Menoth's clergy through its arc node, the Guardian is a walking icon of the Creator's might. It is one of the most versatile weapons in the Protectorate's arsenal, and its presence inspires the faithful to righteous fury. Sanctified and blessed to serve as the bane of profane spellcasters, the imposing Indictor is a bastion of spiritual power against which the foes of the Protectorate must tremble in fear.
The Indictor brings durable enemy spell denial to Protectorate forces thanks to its Consecration ability that prevents enemy models from casting spells while within 5" of it, and Spell Ward, which prevents enemy models from being able to target it with spells. The Guardian, on the other hand, uses its durability to help deliver its warcaster's spells deep into the heart of the battle thanks to its Arc Node advantage.
This plastic kit contains the parts to build either a new resculpt of the Guardian heavy warjack or the new Indictor heavy warjack. 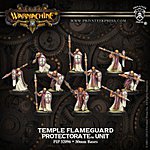 This blazing tide of devoted warriors washes over their foes, swiftly striking down those who dare to oppose the divine will of the Creator. The unwavering Temple Flameguard comprises the Protectorate of Menoth's much-vaunted last line of defence.
Contents: this boxed set contains 10 plastic Temple Flameguard. 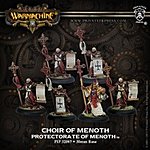 Add to cart€29.99
The choir of Menoth are devout warpriests who accompany Protectorate warjacks into battle, calling down the blessings of the Creator upon these mighty engines of destruction. The choir's prayers can turn aside incoming projectiles, unravel enemy spells before they reach their targets, and divinely guide warjack weapons to smite unbelievers.
Menoth Vassal Mechanik 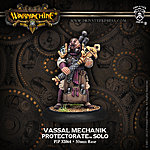 Add to cart€7.50
Prayer alone does not maintain the warjacks of the Protectorate. The mechaniks who learn their trade from the Vassals of Menoth view their duties as a holy necessity. They follow the Protectorate's warjacks into the thick of battle, using them as moving fortresses. Armed only with his tools, the mechanik's greatest weapon is his expertise to keep the warjacks running no matter how severe their damage.
Images originating from the Privateer Press website are © 2001—2018 Privateer Press, Inc. All Rights Reserved. WARMACHINE ®, HORDES, and their logos are trademarks of Privateer Press, Inc. Images and trademarks used without permission. This website is unofficial and is not endorsed by Privateer Press.